This was the first ever Time Attack event at Streets of Willow.  It was greatly debated whether to have it as clockwise or counter-clockwise, in the end it was decided that it would be held clockwise. Streets is a course that can be considered a great equalizer considering how tight the course is, not allowing great use of aero or high horsepower. It is to a car’s advantage to have a well sorted suspension and good mechanical grip, which is where Koherent Chassis Workz tuning, Swift Springs, Whiteline and GTSpec parts gave my car that slight advantage.

Streets was the course I ran on my first HPDE day, and have since ran a multitude of times, thus leaving me very comfortable at this track with minimal practice time.
It was great to see the participation with 56 entries showing the popularity of Time Attack in the US. You know the love for racing is real being that it was over 100 degrees, making for a brutal day to be at a track with no garages.

With my new roll-cage installed from
Pierce Motorsports, I was ready to get out and do some testing to see what effect it would have on the chassis and on the grip of the car. I also added a few other parts– one being a Killer B Motorsport Shift Knob and the other APR Performance Mirrors.

With the new parts, the car handled great even though the track was definitely not at its best. Luckily the power supplied by the Yimi Sport Tune, Borg Warner turbo and fuel injector clinic injectors Based on conditions, it was a constant battle for front end grip and through some changes from Koherent Chassis Workz, we were able to get it set up perfect to tackle the job. 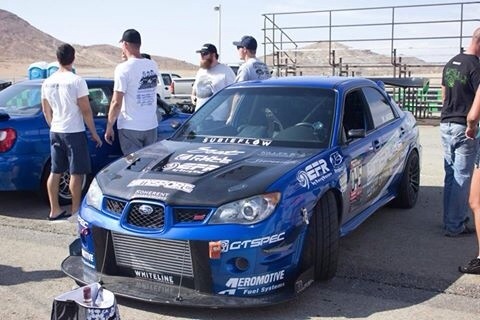 Once on track, the time at this track paid off clocking in with a 1:23 in the practice sessions with sitting in a great position going into the TA session. The TA session was at noon so we knew all the temps were going to be against us, but we had to go out and push hard. Which means I had to lean on my Scat crank and rods and Aeromotive fuel system to supply the power and hold together in this tough Southern California heat.

In the first TA session, I was able to push the car into the No.1 stop in the field with a 1:21.793, which is incredible for a street class car! Feeling good about our time we went inside the streets building to cool off and play the simulator that was there. It was awesome watching Zhong play bumper cars and then fly off the track haha although I think Alex had him beat.
Then before we knew it the 2nd TA session was being called to grid, so we decided to go out and do one lap. We expected the track to only get worse and only see worse times but as soon as I started my lap, I realized that the car had more front end grip, so I decided to go for a good lap. This lap bested our earlier session, slightly putting down a 1:21.766, which in the end landed us in the No.1 spot overall.

Days like this are days when you look around and get amazed by the people standing next to you. The commitment, dedication, and teamwork needed to produce these results are just amazing. I cannot thank my team enough for all the hard work they have put in this season and more!

They deserve every one of these awards, and in the case of Rob, the champagne shower that went along with it! We are just over half way through the season, and still many tests will come, but I am confident in my team and their ability to do whatever is needed to make it happen!
A huge thank you to Rachel Jager, Gil Martin, Paul Leung, Ken Kasitz, Alex Goss, Rami Edirisinghe, Rob Campbell, Aaron Gillis, and Mike Bushrod. I also would like to thank each of my sponsors who believe in me and support me and thank you to all my supporters!
Extra fun in Roy’s Ariel Atom